Shoreditch Office Space have known of plans for Google to set up a building on Bonhill Street for a while but we were keen to see the first photos and read about further details. The property at 4-5 Bonhill Street will be known as Campus, and it will offer desk space to tech entrepreneurs. 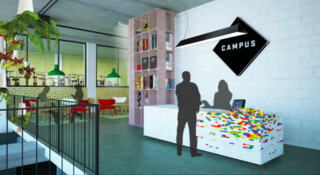 Google will occupy some of the offices space itself but the focus will be on open plan desk spaces, idea rooms, open plan areas for events and cafes.

Like many of the open plan desk sharing in London Google will provide private areas and the use of meeting rooms and will house around 200 desks in total.

The building is expected to open in March, and firms will be able to apply online for desk space, or to attend events. It has been developed with a number of London’s existing tech firms, including Tech Hub, Seed Camp, Springboard and Central Working.

“East London’s Tech City is already home to hundreds of world-leading developers, entrepreneurs and ideas,” Google said in a statement.

“It is rapidly developing into an exciting centre for tech startups. Campus’ goal is to fuel the success of the UK startup community. Let’s fill this town with startups…”

The building is a significant step in the right direction for the TechCity movement backed by the Government.

We can’t wait to take a look around.